The concert on 14th March wasPeter Moore on trombone, with piano accompaniment from Robert Thompson. See a review here.

Peter came to national attention in 2008 at the age of twelve when he became the youngest ever winner of the BBC Young Musician. 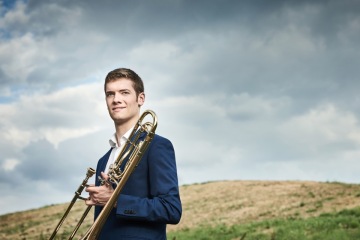 He is the Principal Trombone of the London Symphony Orchestra. Alongside his performing career he is Professor of Trombone and Artist in Residence at the Guildhall
school of Music and Drama.
“Moore displays an eloquence and nobility that one might have thought impossible except by the human voice” – the words of BBC Music Magazine upon showcasing his debut album “Life Force”, released in June 2018.
Peter Moore astounds international audiences with expression directly from the soul and masterful technique, complimented by his boundless versatility and instant personal connection.
In 2018/19 as part of the ECHO Rising Stars Scheme, Moore gave recitals at the Vienna Musikverein, Amsterdam Concertgebouw, Elbphilharmonie Hamburg, Cologne Philharmonie and Barbican Centre.
He has undertaken recital tours across China, Japan, Korea, Australasia and South America, exhibiting a wide range of repertoire from early Baroque music to romantic Lieder transcriptions whilst introducing new audiences to original trombone works.
As a soloist Moore has appeared with the London Symphony Orchestra, BBC Symphony Orchestra, BBCNOW, BBC Concert Orchestra, Ulster Orchestra, Lucerne Symphony and Polish Chamber Orchestra. He is featured frequently on BBC Radio 3 and was a New
Generation Artist between 2015-2017. He has given multiple performances at the Wigmore Hall and in 2018 made his US debut at the Spoleto festival. World premieres by Francisco Coll, Roxanna Panufnik and the UK premiere of James Macmillan’s Trombone Concerto signify Peter’s desire to bring the trombone to the forefront of contemporary music.

Peter Moore is a Yamaha International Artist and is grateful for their continued support over the past ten years. 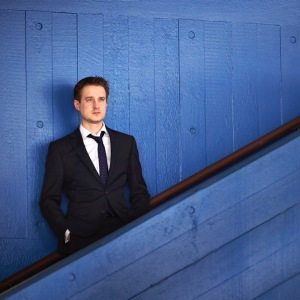 As a chamber musician Robert regularly collaborates with instrumentalists including cellist Philip Higham, violinists Benjamin Baker, Thomas Gould and Bartosz Woroch, trombonist Peter Moore and the Heath Quartet.  In 2014 he recorded music by Strauss and Beethoven for Champs Hill Records with Benjamin Baker.
For 10 years Robert was a member of the Rhodes Piano Trio.  The Trio was selected by YCAT in 2010 and in July 2011 won 2nd Prize in the Melbourne International Chamber Music Competition.  They went on to give recitals at Wigmore Hall, Barbican, the Louvre, Aldeburgh, Verbier, Aix-en-Provence, Mecklenburg-Vorpommern and Schwetzinger Festivals. In 2012 they were fellows at the Guildhall School of Music and Drama and resident ensemble as part of the Ones to Watch series at Yong Siew Toh Conservatory of Music in Singapore.
Robert studied at Chetham’s School of Music and at the Royal Northern College of Music. In 2010 he completed his Master’s with Peter Frankl at Yale University where he received the Charles S. Miller prize for outstanding work. He has taken part in masterclasses in Appeldorn (Holland), the Britten-Pears School Aldeburgh, Verbier, Aix en Provence and IMS Prussia Cove, and worked with Andras Schiff, Stephen Hough, Charles Rosen amongst others, and enjoyed intensive Chamber Music coaching from Mitsuko Uchida, Menahem Pressler, Alasdair Tait, Ferenc Rados, Ian Brown and Gabor Takacs-Nagy.
He has performed widely as a concerto soloist in repertoire ranging from Mozart to Shostakovich, regularly taken part in the Lake District Summer Music Festival as Rising Star, and given recitals at venues and festivals across the UK.
Robert was Head of Piano at Bedford School for nine years and is now Assistant Director of Music (Performance) and Head of Keyboard at Christ’s Hospital School.