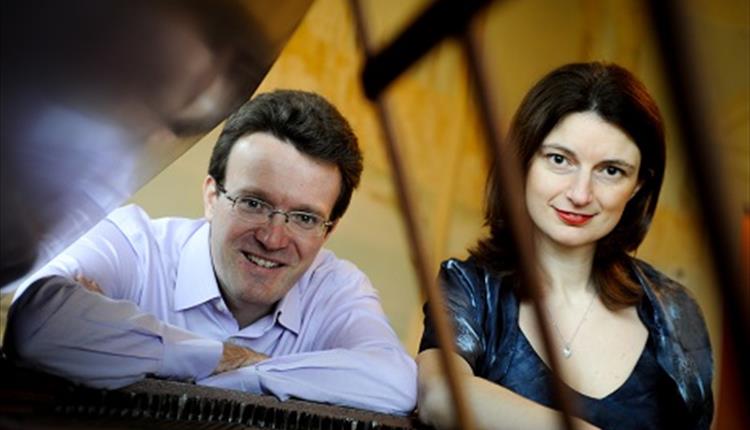 Emma Abbate and Julian Perkins have given keyboard duet recitals at many prestigious UK venues including the Royal Opera House, St John’s Smith Square and St George’s Bristol. The varied sound world of historical pianos inspires their approach to a broad repertoire that ranges from J. C. Bach to the present day, and they have given recitals on original instruments for the Finchcocks Charity, at Hatchlands Park and the Russell Collection. They have recently released the second volume of Mozart’s complete piano duets on period instruments for Resonus Classics. This album was the first to be recorded on the newly-formed Richard Burnett Heritage Collection of Early Keyboard Instruments and has been highly praised by BBC Music Magazine. Their first volume was described by Early Music Review as “exemplary”, and represents the final recording made at Finchcocks Musical Museum. Future engagements include a duet recital in Boston for the Mozart Society of America in 2019.

Described as ‘an amazingly talented pianist’ by Musica, the Neapolitan pianist Emma Abbate has performed duo recitals for international festivals and concert societies in Salzburg, Lisbon, Naples, Ischia and Koscierzyna. She has also performed at many prestigious UK venues such as the Wigmore Hall, Southbank Centre, Royal Opera House, St John’s Smith Square, St George’s, Bristol, and at the Aldeburgh Festival, in addition to broadcasts on BBC Radio 3.

Emma is releasing a series of recordings devoted to 20th-century Italian vocal chamber music, the latest of which is Sera d’inverno: a disc of songs by Ildebrando Pizetti with mezzo-soprano Hanna Hipp for Resonus Classics. She has previously recorded the world-première disc of Shakespeare Sonnets by Mario Castelnuovo-Tedesco with the BBC New Generation Artist Ashley Riches, also for Resonus Classics. A keen advocate of contemporary music, Emma has also released two discs for Toccata Classics devoted to works by Stephen Dodgson: world-première recordings of his cello and piano music with Evva Mizerska, and his piano quintets with the Tippett Quartet. The latter disc was named a Musicweb International Recording Of The Year 2017.

Described as ‘exuberantly stylish’ by the Sunday Times, Julian Perkins is the Artistic Director of Cambridge Handel Opera and Founder Director of Sounds Baroque.

As a player, Julian has performed concertos with the Orchestra of the Age of Enlightenment, Royal Northern Sinfonia and Orchestra of The Sixteen, and has gained a wealth of experience collaborating with many leading period instrument ensembles and modern orchestras. In addition to performing as the solo harpsichordist in productions at The Royal Opera House, Welsh National Opera and Northern Ireland Opera, he has featured on BBC Radio 3’s Early Music Show and appeared at numerous venues such as London’s Wigmore Hall, New York’s Lincoln Center and Sydney Opera House, as well as at the BBC Proms and Edinburgh International Festival. Solo recitals in the UK have included appearances for international festivals at St Albans, Buxton, Canterbury, Deal, Lammermuir, Northern Aldborough, Oundle, Petworth, Roman River, Ryedale, Swaledale and Two Moors. His acclaimed discography includes chamber, solo and opera recordings for Avie, Chandos, Coro, Opus Arte and Resonus on a wide range of instruments, including the Royal Harpsichord at Kew Palace.

Julian read music at King’s College, Cambridge, before pursuing advanced studies at the Schola Cantorum, Basle and the Royal Academy of Music, London. He is a visiting coach at the Royal Opera House, directs the annual Baroque project with Southbank Sinfonia, and has given masterclasses at the National Opera Studio and several music colleges both in the UK and abroad. www.julianperkins.com