The Oliver Leith piece was commissioned to feature on the quartet’s upcoming recording release. It is loosely based on a Fantasy by Matthew Locke, a British baroque composer, and was premiered at Lake District Summer Music last year, where it went down very well.

This brilliant string ensemble includes two artists who have delighted Curry Rivel Music audiences before.   Alessandro charmed us in 2014 as a Countess of Munster Trust 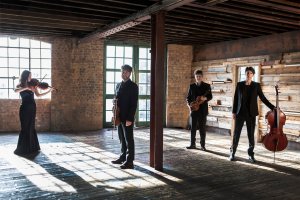 sponsored violinist, and Luba has twice appeared as the sublime viola player of the Pelléas Ensemble.   Alessandro founded the quartet in 2012 with his brother Max and they, Luba and Oliver have established a reputation as a charismatic and expressive ensemble delivering performances which are “…. strikingly immediate, committed and direct” – winning the Royal Philharmonic Society’s award for Young British String Players.

A review of the concert by Malcolm Cotterill

The appetite for good music performed by brilliant artists of international stature could not have been better demonstrated than it was on Saturday 26th March at St Andrew’s Church, Curry Rivel.   An astonishingly large and enthusiastic audience was present at the society’s first concert in over two years and was rewarded with the captivating charm and brilliance of the Ruisi Quartet with a programme covering composers born in 1685, 1732, 1770 and 1990,

The second of these, Joseph Haydn set off the programme.   This was a sparkling, exuberant performance of his Quartet Op. 20 No 1 written in 1772 – a work which contributed greatly to his becoming known as the “father of the string quartet”.   In short, he put down a marker but in 1740 or thereabouts JS Bach had also established his own marker for aspirant composers.   His Art of Fugue comprised a collection of 18 works which were an “exploration in depth of the contrapuntal possibilities of a single theme”.   He never specified by what instrument or combination of instruments each was to be played but the depth and complexities of the work still tax the skills of those who approach the challenge and one well met by the Ruisi with consummate skill.  These two geniuses’ works were separated by something completely different.   The fantasy of Oliver Leith was commissioned by the Ruisi and given its world premiere in 2021 – since performed again by them in the Wigmore Hall.

After a convivial interval – free wine and coffee! – we hit the high spot of the evening.   This was one of Beethoven’s late quartets, his Opus 132 – indeed, one of his last works as he died two years later.   In April 1825 he was bed-ridden and, of course, profoundly deaf.   Precisely what laid him low at that time is not recorded but he is known to have suffered from inflammatory bowel disease, Paget’s disease, kidney disease and liver disease – all of which became obvious at his post-mortem.  There is little doubt that he believed he was close to death when he wrote the quartet.     The trepidation, the turmoil, the turbulence and the terror are all there in the music.   The tension generates a frisson in the listener – contemplating disaster while clinging to the ever-present unquenchable, inextinguishable spirit of hope that permeates the whole piece – eventually emerging triumphant!   In short, there is no piece that better encapsulates the experience of Ukraine.   All we await is the triumph and the basis for that thanksgiving with which Beethoven celebrated his own emergence from the jaws of death.

It was an altogether memorable evening.

The next concert will be on Saturday 23rd March when two artists sponsored by the Countess of Munster Musical Trust, Meera Maharaj (flute) and Dominic Degavino (piano) will play for us.

Full details are on our website, curryrivelmusic.org or contact our Secretary, Anne Michell on 01458 250863 or email anne.michell@btinternet.com